A Drum Roll for a Role Model

Louis Rossi Williamson was born in Aberdeen, Scotland, and joined the Canadian Armed Forces Music Branch in 1966. Throughout his 29-year career, Lou was a featured soloist, performing for over 20 years with the Black Watch in Montreal, followed by one year at the Armed Forces School of Music, Camp Borden and four years with the Naden Band of the Royal Canadian Navy.

During his career as a military musician, Lou created and taught the curriculum for the Bachelor of Arts Musical Performance in Jazz Drum Set at McGill University. Lou was also the drum set instructor and rhythm section clinician at Concordia University. As a clinician, adjudicator and conductor, Lou appeared in numerous music festivals, workshops, clinics and seminars across Canada.

From 1996 to 2009, Lou also assumed the position of President of AFM Local 247, The American Federation of Musicians, representing musicians from Victoria and the Islands. In all his endeavours as a performer and mentor, Lou earned the respect and admiration of musicians everywhere, young and old.

A featured jazz drum set soloist, vibraphonist and percussionist across Canada and the United States for over 30 thirty years, Lou’s spectacular drum solos never failed to elicit standing ovations from his audiences, regardless of age. Lou performed in concert with Bill Watrous, Paquito d’Riviera and Houston Person. While in Montreal, Lou also performed with Ranee Lee, Vic Vogel and Denny Christianson big bands. In Victoria, Lou worked with the Tom Vickery Trio, the Dixieland Express, the Chris Millington Big Band and the Chris Millington Quartet. Lou was also a featured soloist in the Vancouver Arts Club production, Swing!

Lou’s versatility as a percussionist was also featured with the Victoria Symphony, the Palm Court Light Orchestra, Pacific Opera and the Victoria Operatic Society. The vibraphone was Lou’s favourite percussion instrument and he delighted in the opportunity to step out from behind the drum kit and appear in concert as a vibes soloist and group leader. In this setting, Lou performed vibraphone with four-mallet style. The group performed an eclectic and intriguing mix of standards, hot Latin tunes and contemporary Jazz with a fresh treatment of music by Miles Davis, Chick Corea, Duke Ellington and Bill Evans. The quartet’s Shades of Shearing concert program was a favourite with audiences.

This was one of the last photos taken of Lou with the Chris Millington Big Band. Lou is at the top left. 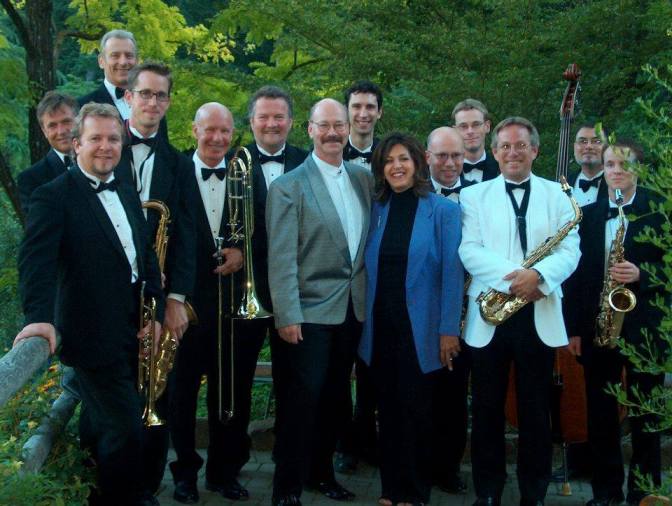